Directions
1. In large pot, mix together the Tender Quick, canning salt, and sugar to the water and bring to a boil. Remove from heat and let cool.
2. Pour the cooled brine over the goose breasts in a plastic, glass, or other non-reactive container. Add 3 Tbsp. peppercorns, pickling spices, and garlic cloves. You may have to weigh the goose down with a plate or board to keep the breasts submerged. Cover and refrigerate for 5 to 7 days, stirring the brine every other day.
3. On St. Patrick’s Day, remove the goose breasts from the brine and rinse them well. Place the breasts in a large pot, cover with cold water and add remaining the 3 Tbsp. of pickling spices. Bring to boil. Lower heat and simmer for at least 3 hours.

Nicholas Ernest Como, called Nico by his Spanish friends in the USA and by everyone in Cordoba, is a dear hunter and friend of me, my family and the C&C Outfitters Staff.  He has come to Cordoba, Argentina, to hunt doves and pigeons for his 12th straight year.

We want to recognize that he has come to Argentina to hunt with Nacho and C&C Outfitters every year since 2007.  Nico will gladly explain how good the hunting is with Nacho.  He is 68 years old and will continue to visit Nacho and the beautiful Argentine countryside in the future.

Please feel free to contact him and he will surely tell of the wonderful times he has had with Nacho, the C&C Staff, and the finest dove and pigeon hunting the world has to offer. 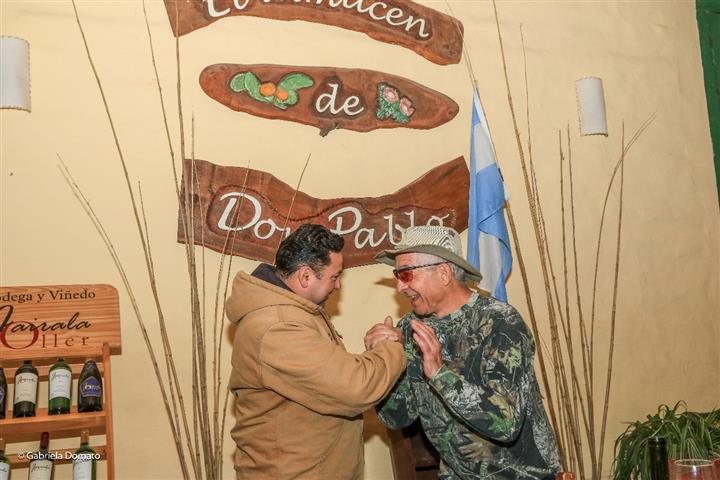 Dorado (or mahi-mahi as they are called some places or dolphin fish as they are called in other places) are one of the world’s most popular gamefish, and it’s no mystery why that is.  They are spectacularly colored, fight hard and jump when hooked, and taste delicious.  They are abundant in most tropical locales and because they are a fast-growing, short-lived fish they are hungry more often than not.  They die of old age around 5-6 years and attain a maximum weight of around 90lbs.

Words and pictures cannot adequately describe the beauty of a fully lit up Dorado in the water.  I have seen thousands of pictures of Dorado and I can’t remember one that looked as good as the real thing.  They can change the intensity of their colors based on their mood and unfortunately their color usually fades almost immediately after they are brought on board a boat.  By the time they get back to the dock they are usually a dull gray color and you would have a hard time convincing anyone that they are one of the most strikingly colored fish in the ocean.  One of my fishing goals in life to get a picture that truly captures their beauty.  The ones in the gallery below are as close as I’ve gotten so far.

Males, often called “Bulls”, have a large distinctive flat forehead.  They grow bigger than the females, which are called “Cows”.  Most fish over 25lbs or so will be male.

Any medium weight conventional set up should work fine.  A Shimano Trinidad 16N is a good reel for casting.  Unfortunately, Dorado are often hooked when trolling with heavy tackle meant for larger fish such as Marlin and so they are totally outmatched and really don’t get a chance to show what they are made of.  This is one of the great tragedies of sportfishing.  If you hook a 30lb+ Dorado on a lighter saltwater baitcasting rod and reel you are in for quite a fight.

Any medium weight conventional set up should work fine.  A Shimano Trinidad 16N is a good reel for casting.  Unfortunately, Dorado are often hooked when trolling with heavy tackle meant for larger fish such as Marlin and so they are totally outmatched and really don’t get a chance to show what they are made of.  This is one of the great tragedies of sportfishing.  If you hook a 30lb+ Dorado on a lighter saltwater baitcasting rod and reel you are in for quite a fight. 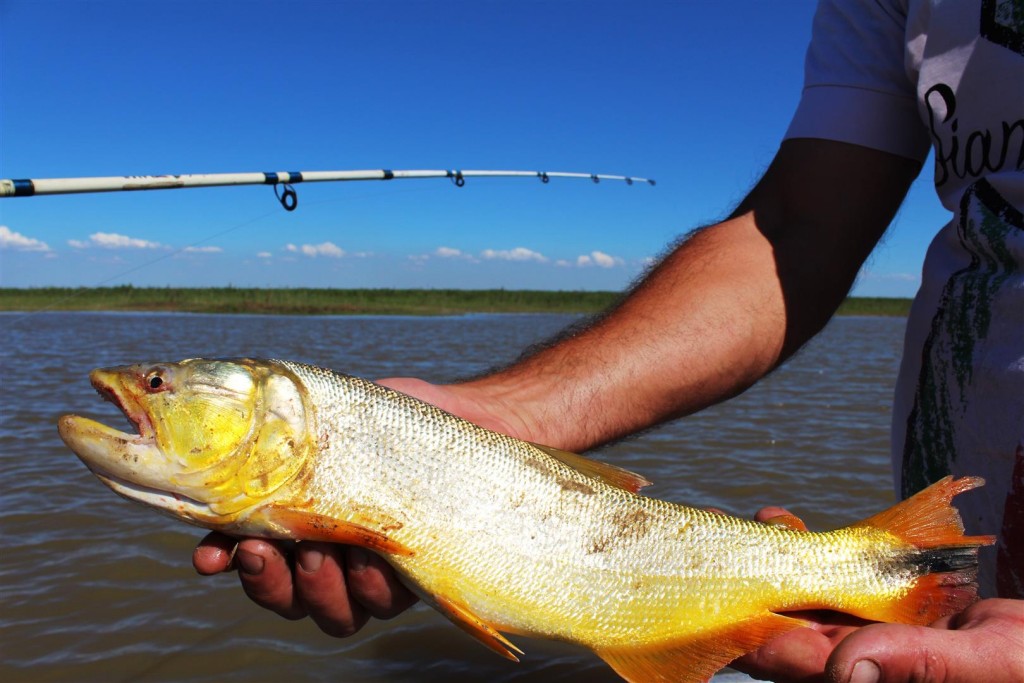 Dorado mostly eat fish so traditional baitfish such as sardines and Pacific Mackerel work well.  Larger fish will eat larger baits.  Dorado have relatively small mouths but it always amazes me how they can somehow still engulf relatively large baits.  When they are fired up they will eat almost anything, alive or dead.

Where to get the big Dorado

Any tropical location where there is good fishing for other pelagics such as Marlin or Wahoo should have some Dorado.  Some world-record fish have been caught in the Cabo San Lucas area so that would be a good bet.  After rain flushes debris in the water is a good time to go Dorado hunting as the debris will concentrate them.

Rugged, precise and with brute power to spare, the Alexander Arms .50 Beowulf Hunter is ready to tangle with the nastiest game North America can throw at you.

“This rifle makes me feel like Thomas Jefferson,” exclaimed my friend Cody, ret. U.S. Marine Corp., after he blasted seven rapid-fire rounds of .50 Beowulf into the Arizona dirt. “I might as well have a bald eagle perched on my shoulder right now; there’s a whole lot of freedom going on here,” said Cody as he gazed into the vast desert of the Prescott National Forest with the Alexander Arms .50 Beowulf Hunter.

Cody was not alone in his charismatic reactions from shooting the Alexander Arms .50 Beowulf rifle for the first time. The brute power of the Beowulf cartridge results in a dramatic report that seems to make shooters howl like a werewolf after every trigger pull.

The rifle produces a distinct thumping muzzle blast that literally makes shooters feel the hair on their head move. Surprisingly, although the .50-caliber cartridge produces a whopping 2,400 foot-pounds of muzzle energy, its felt recoil is comparable to a 12-gauge shotgun with 2-3/4-inch bird shot.

Howl at the Moon
Exotic as it may be, the Alexander Arms .50 Beowulf Hunter AR-15 still oozes practicality. Chambered for .50 Beowulf, the beastly cartridge undoubtedly has the ability to harvest every big game animal in North America. According to Alexander Arms, “The heavy bullets from the Beowulf are quite capable of breaking both shoulders of a moose.”

Retaining the familiar dimensions and ergonomics of a standard AR-15 carbine, this rifle’s big bore is one of the only components that distinguishes it from typical ARs. In fact, the .50 Beowulf is compatible with standard AR-15 upper and lower receivers, handguards, buffer systems and small parts.

A standard AR-15 buffer and buffer spring do not even need to be replaced to effectively handle the .50 Beowulf’s increased recoil, as the Beowulf cartridge was designed to work specifically with standard lower receiver components.

While the .50 Beowulf cartridge adds an extraordinary “wow” factor, the rifle comes packed with more mouth-watering features right out of the box.

Under the handguard, a 16.5-inch chrome-moly button-rifled barrel with a 1-in-20-inch twist rate launches massive 335-grain projectiles at 1,800 feet-per-second.

Threaded to the barrel for recoil reduction and muzzle rise mitigation is an Alexander Arms Millenium Compensator, which disperses energy through an oversized four-port design that billows visible flames in daylight conditions. At the rear of the rifle, a B5 Systems SOPMOD adjustable buttstock provides counterbalance to the rifle and offers ample comfort for the shooter, despite the Beowulf’s significant recoil.

Fishing is not only a fish out of water, it is something much deeper, passionate and even might even say magical.
Its preparation, their language, their successes and failures are key parts of this wonderful world we know just who we move into it. It is life that makes us fishermen. 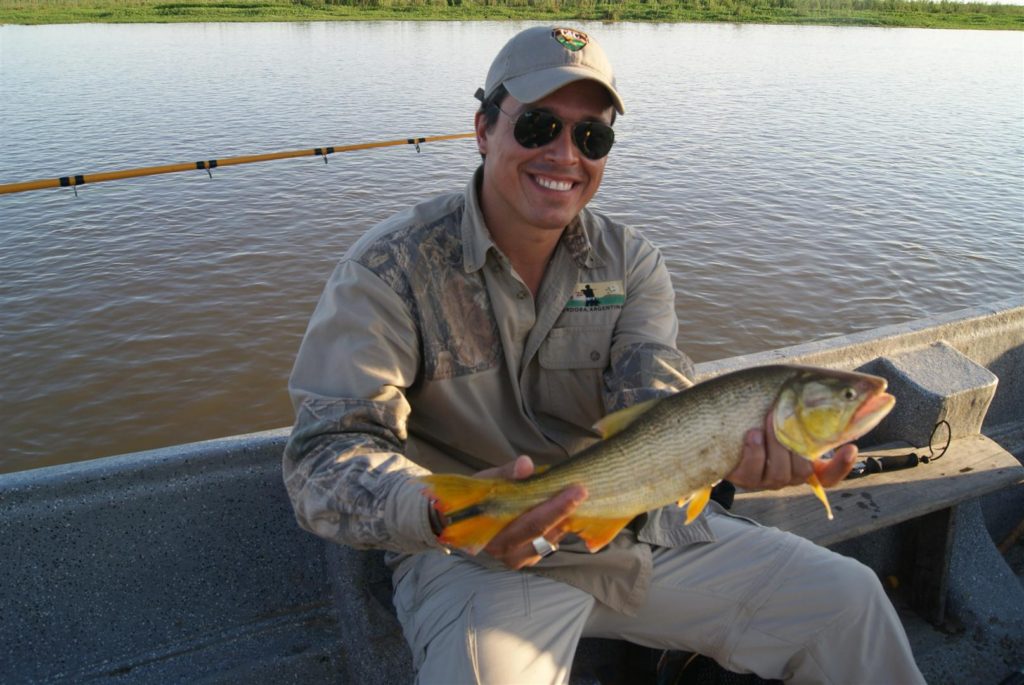 A fisherman is one who even after fish most of his life still marveled at the feeling of not knowing what’s under the water. Therefore, the spirit of fishing remains intact and becomes magical.
Argentina is a paradise for sports fishermen. Its sea, rivers, lakes, ponds and reservoirs, are true natural sanctuaries to know each of the provinces and cities that make up the map of the sport fisherman in our country.

The chances are we know exactly what you need to unwind and enjoy a unique fishing experience.
Fishing trip is one of the most relaxing, entertaining and invigorating ways to spend your holiday. Are ideal for individuals, friends groups and family. Imagine trolling the Parana watching the lures popping along at the back of a nice boat. Sounds picturesque? Escape to the secluded retreat of Cuatro Soles San Javier Argentina, set in a stunning Argentinian countryside bathed by deeper water of the Parana River.
Gorgeous rooms and suites, innovative international cuisine and multiple activities are the perfect ingredients for a stay in paradise.

Here in Argentina, we are spoilt for choice when looking for fishing spots such as the marvellous and magnificent Parana River, which offers us dorado, eel, catfish, boga, pacu, piranha, sardine, among others.

At C&C we believe your trip venture starts from now, choosing where and when to go, so why not let us give you the benefit of all our years of experience?

C&C is well known for the quality of their fishing trips in San Javier. We ensure you an extraordinary experience.